Much has been said and written in recent years about the importance of trees in our Countryside, towns and Cities, where it is now recognised that they do much to improve the environment, and our quality of life.

Since the foundation of the Wetherby Civic Society in 1994 the Society has taken upon itself, along with other enthusiastic groups, the pleasant duty of doing all it can towards “The Greening of the Town”. As its contribution towards this worthy aim, the Society has financed the planting of trees wherever permission has been obtained, and therefore the cost of purchasing trees has always been high on the list of its priorities annually.

To date over 400 Tree Species Native to the British Isles have been planted in various locations throughout the town. They are being enjoyed by today’s inhabitants together with visitors to the town. However, as the a Forestry Commission statement declared in 2005,

“No one plants a tree and expects to gain the full benefit in their own lifetime. The planting of a tree represents an investment in the future, for the enjoyment of our children and grandchildren”. 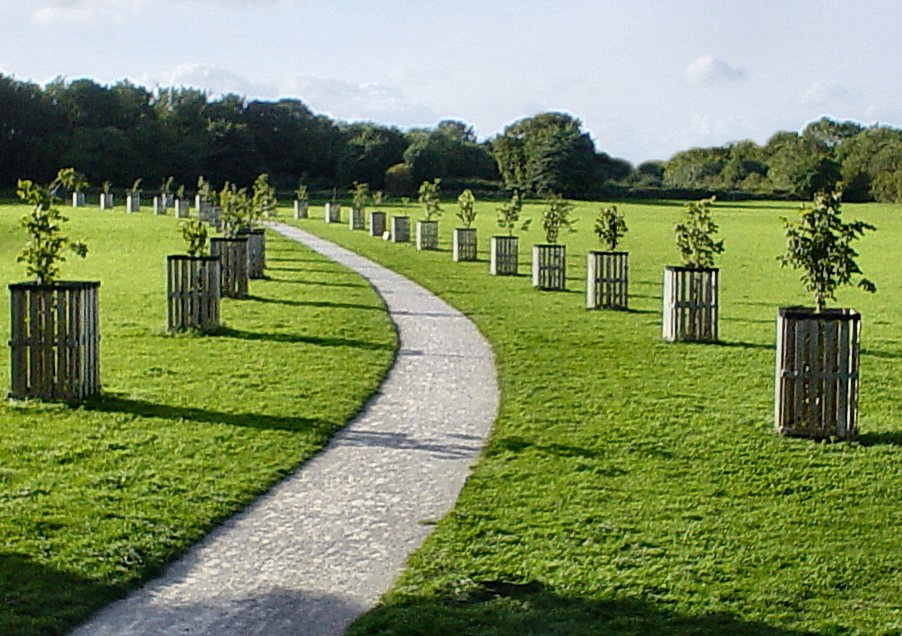 In the year 2000, a special appeal was made to the Society members and other Townspeople, in order to support and finance the planting of a Lime Tree Avenue across Hudson Field, now known by many as the Millennium Field.
Much to the surprise of many, over £7,000 was raised within weeks from all manner of people. Following this wonderful response no fewer than 36 Lime Trees were planted, together with a suitably worded commemorative plaque set on stone within the trees, to the delight of all involved.

During the same year and annually ever since, with the kind permission of the Wetherby Sports Club, the Society has continued to plant trees alongside the river Wharfe close by the footpath as it winds its way downstream. Wetherby residents and members of the Civic Society have paid for many of the trees planted, but we still have a number of trees that require Families to adopt them.

Following the hot Summer of 2006, a number of trees became distressed by drought and died. With the kind help of Wetherby Town Council who have paid to replace the Lime Trees, and our local tree experts, William Pullan and Family, we are concentrating on replacing all the trees that have been lost.

For the immediate future our quest continues. We will endeavour to complete the line of trees on the Ings by the river, and when this site is exhausted we plan to seek out other suitable locations for more trees within the Town Boundaries.