In 1723 a fire which started in a chandler’s shop off North Street swept through the town and destroyed 40 houses, around half the town’s building stock at the time.
High winds had fanned the flames and the affected buildings were said to be entirely destroyed, along with their contents. The losses amounted to over £7,500 with no casualties.

A extract from The Newcastle Weekly Courant says

London, March 23. They wrote from Wetherby, in Yorkshire, that a Fire broke out there last Week, which burnt with so much Violence, that almost the whole Town was reduc’d to Ashes

The extract says “We hear from Wetherby in Yorkshire, that several Locusts have been found there, and in the neighbouring Townships, exactly resembling those described latley in this Paper, but that they have hitherto done no Damage, on Account of the Smallness of their Numbers.

‘Whereas on the morning of Saturday 30th January the portmanteau containing the bags of letters from London to Knaresborough and Harrogate on the 28th January, and the bye bags of letters from Wetherby and its road connectiong to those places, was stolen from the mail rider’s horse at the Posst Office in Wetherby, whilst the rider was putting on his great-coat. The portmanteau was on the same morning found in a field near Wetherby with a number of letters, all of which has been opened. Whoever apprehends the person or persons will receive £20 on their commitment for trail, the remaining £30 upon conviction`.

Thomas Robinson was apprehended in York the same afternoon with £2000 in drafts, notes and cheques, Suffered capital conviction in York that year

The trail adds the following details:

The Glasgow mail coach from London arrived Post Office, Wetherby 11:30pm 29th (Mr Huntly, Postmaster, John Smith, Clerk) and was kept safe overnight. Matthew Dobson, Main Out Rider, (Employed as such for some years). between Wetherby and Harrogate, collected the four bags at about 5.30am and fixed them to his horse at the stable door. He returned into Mr. Huntly’s house to get a person to assist him with his greatcoat, being lame in one arm, and was away about 3 minutes. When he returned the bags were gone.`

Details from “Whatever the Wetherby” by G.F.Stead

One night a band of youths went to Elli’s yard, man-handled a horse water cart stored there, pulled it to the house of Mr. Blakey in Horse Fair, and tied string to the peg at the back of the water cart, and to Mr. Blakey’s door sneck.

When they kicked at the door, Mr. Blakey went to investigate, and when he finally managed to open the door, he pulled out the peg, resulting in the release of the water in the cart which cascaded into his house.

Such pranks today would result in police court proceedings as would the taking down of a shopkeepers shutters and throwing them over the bridge wall into the river.

Found in “Whatever the Wetherby by G.F.Stead”

A tank destroyed the front of Mr Fred Kitchen’s shop in North Street. A convoy of Bren-gun Carriers was passing through Wetherby from North to South one Sunday afternoon in 1943. The caterpillar track on one vehicle snapped, a large piece flew into the air – later requiring two soldiers to lift it – and the tank slewed to the right and disappeared into Fred Kitchens shop. No one was hurt, but a lady who was taking her Sunday afternoon nap in an upstairs bedroom next door had a sudden awakening. The building did not collapse; in fact, it was fairly soon repaired.

A gasworks was first established in Wetherby in 1845 at a cost of £3000 and was in operation from 1852, on what is now Gashouse Lane. The streets were lit by gas up until 1960 when they were converted to electricity.

Wetherby had two gasholders which dominated the skyline but it closed in the late 1970s.

Since the conversion to natural gas there was no longer a need for the gasworks and the site has now been redeveloped for use by offices and small businesses. 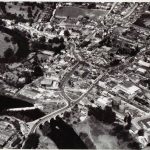 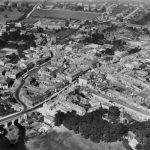 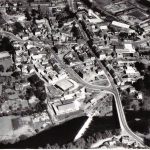 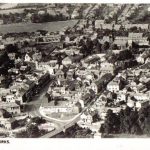 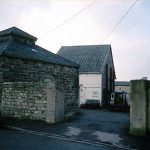 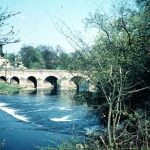