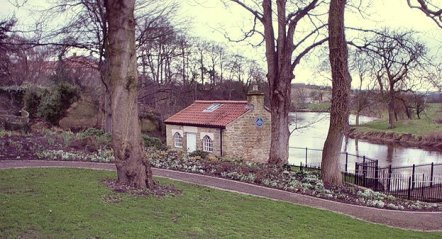 The unusual Georgian Bathhouse at Wharfedale Lawn was built over 200 years ago when cold water plunges were regarded as bringing relief to a variety of complaints. 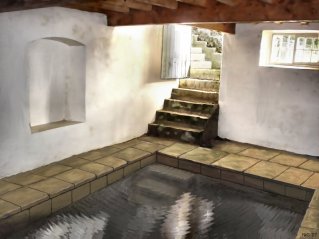 The lower floor contains a sunken bath fed by spring water. It is 1.5metres deep and measures 2.4 metres by 3.7 metres – in “old money” 5 feet by 12 feet by 8 feet. Access to the bath is by steps in one of the corners and it is surrounded by paved walkway with three alcoves.

After a series of plunges, each followed by a circuit of the bath, the bathers would climb up to the “warming room” above encased in thick flannel. Here they would socialise with friends in front of a roaring fire take food and wine and play cards most likely for relatively high stakes, gambling being one of the curses of Georgian England. 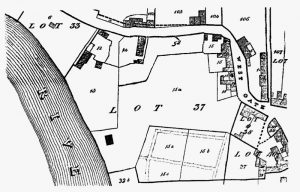 The first historical reference to the Wetherby bathhouse is in 1824 when the young 6th Duke of Devonshire the then owner of nearly all of the town, sold it off in a Great Sale by auction in the space of four days. Part 15a of lot 37 was described as “A valuable Paddock or croft, in which is a bath and Dressing Room near the River.” Sadly the Chatsworth archives concerning Wetherby before 1824 have perished. In spite of extensive research we have been unable to identify the tenant at the time.

Casting around for information about other cold baths brought to light a surprising number in Yorkshire, Derbyshire and Durham. Some like St Mungo’s Well at Copgrove near Knaresborough no longer exist, although Celia Fiennes describes it and its patrons in her diary “Through Yorkshire on a side saddle in the time of William and Mary”.

A similar open bath of the late 17th century still exists in the Gledhow valley in Leeds with a warming room attached.

The 18th century brought a widespread development by the wealthy of pleasure grounds influenced by the classical periods of Greece and Rome. This produced an array of temples, gazebos and bathhouses. Bathhouses fell out of fashion in the next century and many are only remembered by an entry on a map – such as Bathing Well Wood in Stockeld Park.

There are references to forgotten cold baths at Studley Royal, Gibside in County Durham and Hardwick Park near Sedgefield. Kedleston Hall, near Derby, still has two- although the earlier one possibly by James Paine is not accessible to the public. The second one by the lake is a stunning multi-purpose building with a cold bath, two boat houses and an elegant upper room which allowed fishing from its large window.

In Wetherby pressure to preserve the bathhouse was led by the Weir Preservation Trust. Through the initiative of Dr James Lodge in 1988 the bathhouse and the adjacent open-air oval pool was listed Grade II in 1990. This brought a certain measure of protection but did not prevent the roof pan-tiles being stolen with the result that the building rapidly deteriorated.

In the mid 1990s the newly formed Civic Society took up the cause of the bathhouse. The conversion of the main house and its lease to Cheshire Homes gave the opportunity to restore the bathhouse. Using funds provided through the Landfill Tax the adjoining garden was landscaped.

The bathhouse and garden are now valuable public amenities in the care of Wetherby Town Council. Through the labours of Civic Society Members and Wetherby in Bloom volunteers the gardens have been restored to provide a fitting background to an unusual survival of an uncommon building type.

Few bath houses and plunge pools, relics of the Georgian fashion for healthy cold water bathing, now remain in Britain, but we suggest a few below. You can also read more about their history and design here: https://www.buildingconservation.com/articles/bath-houses/bath-houses.htm

https://www.nationaltrust.org.uk/stourhead
Stourhead’s plunge pool is discreetly situated in an artificial grotto created for the estate’s gardens.

https://www.congletonbhpg.co.uk
This Georgian Bath House, close to Congleton town centre, is set in a Physic Garden and has been restored and is maintained by volunteers.

https://www.rhs.org.uk
An interesting variation: RHS Harlow Carr garden near Harrogate includes a Bath House built in 1840 to create a Spa based on the sulphur wells found there.

The fashion for Turkish Baths led the innovative Victorian owner of Cragside, in Northumberland, to introduce, inside his own home, this variation on the health benefits of water. www.nationaltrust.org/cragside